After a great time birding and meeting new friends in the Mission, Texas area it was time to head home. We felt rushed on the way to the hop and that is NOT the way we want to travel. Our bodies are much happier when we take our time and go slow. We decided not to rush in any way on the way back to Arizona. We have plenty of time to make it back by the 1st of May, so will go slow. We headed out late Sunday morning and spent the night in the Wal-Mart parking lot in Alice, Texas. We had stayed there on the way down, so figured it would be a known stop on the way back.

It was on to the Escapees Park in Hondo. Fairly equitable day of sharing the driving. Connie drove further than I did but not by much. I made a mistake and forgot to put the gas cap back on the RV when we filled up with gas so had to go find a new one upon arrival in Hondo. Lucky for me, the local Napa had one in stock. We decided to spend two nights here and rest up a little. We really are not into driving hard every day and want to enjoy the journey. On Tuesday we took the CRV for a drive around the area and ended up in Castroville, TX.  Castroville was settled by folks from the Alsace region of France. We wanted to try Haby’s Bakery, and boy are we glad we drove there. What a place, if you are ever near Castroville you really need to give it a try.  On Wednesday we left the Escapees Park and travelled to Sonora, Texas. Another parking lot night. The drive from Hondo to Sonora was pretty windy and at times rainy; it was also very pretty with all the Texas wildflowers on the back roads.

Hard day of travel in the winds today. We had thought we would make it to Balmorhea State Park. Unfortunately, the winds that come roaring over the plains had other plans. Connie drove the first 75 miles and I was due to drive the next. The winds were to strong for me so Connie took over and got us the rest of the way to Ft. Stockton. Very difficult to control the RV when the wind is blowing hard enough to send it off the road. We settled in to an RV park on the outskirts of Fort Stockton and made arrangements to stay until Saturday morning. We are hoping that by staying we might miss some of the super strong winds between here and Van Horn. It is supposed to be blowing in excess of 40 mph on Friday and later Saturday afternoon. If we get out of here early enough Saturday we can beat the late afternoon winds to Van Horn. Pepper took all of the wind and hard driving in her usual “it is a riding day” style. 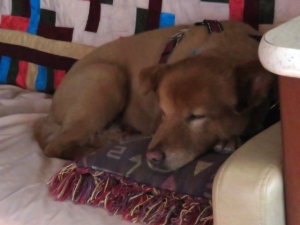 Some of our Recent Posts

Recent comments on the site

Two retired educators touring the country in their motorhome

Travels with the Blonde Coyote

Follow the Blonde Coyote and see more of the world!

Wheeling It: Tales From a Nomadic Life

On the Road Since 2010, Traveling Across USA & Europe With Pets

TRAVEL WITH THE BAYFIELD BUNCH:))

rvsue and her canine crew